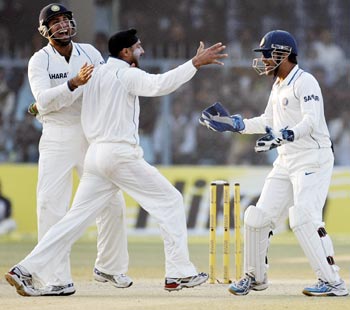 India became the number one team in the ICC Test rankings after they spanked Sri Lanka by an innings and 24 runs in the third and final Test to clinch the three-match series 2-0.

Needing just four wickets to register an emphatic victory, the hosts took just 7.4 overs and 35 minutes on the final day to polish off the visiting team's tail and post their second consecutive innings victory.

Resuming at 274 for six, the Sri Lankans lost their heroic captain Kumar Sangakkara (137) in the day's first over and were bundled out for 309.

Zaheer Khan was the pick of the Indian bowlers with figures of 5 for 72.

It was also India's 101st Test victory and their fifth at the Brabourne in 18 matches.

The Sunday crowd at the stadium, hosting a Test match after a gap of 36 years, witnessed the historic moment as Mahendra Singh Dhoni and his men crowned themselves the number one Test team.

The crowd erupted into a frenzy as Muttiah Muralitharan edged a flighted delivery from Harbhajan Singh to Dhoni to bring down curtains on the Lankan innings.

The Indian players hugged each other and a beaming coach Gary Kirsten greeted them as they returned to the pavilion.

The teams will now gear up for two Twenty20 matches, in Nagpur and Mohali, followed by a five-match one-day series which begins at Rajkot from December 15.

India is only the third team after Australia and South Africa to surge to the top of the ladder since the Test Championship was introduced in May 2001.

The 2-0 series win also means India will finish 2009 as the number one-ranked side after starting the year in third place, behind Australia and South Africa.

Although Australia's ongoing series against the West Indies will conclude before the year ends, even a 3-0 clean sweep will not be enough for Ricky Ponting's side to challenge India's top spot.

South Africa, who had gone top of the Test rankings in August, after Australia lost the Ashes to England, will have an opportunity to regain its position when it goes head-to-head with England later this month in a four-Test series.

A series win by 2-0 or better will give Graeme Smith's side its number-one spot back, but anything less will result in an increase to India's lead.

The number one ranking in the most challenging and demanding format of the game should bring smiles on the faces of India players and its millions of supporters as Dhoni's side had missed out on an excellent opportunity last month to topple Australia from the top spot.

While the 2-0 success put India on top of the world, the defeat dropped Sri Lanka from second place to fourth spot in the Test Championship table, which is only updated at the end of a series.

Join us in congratulating Team India, which hasn't lost a Test series since August 2008 in Sri Lanka.