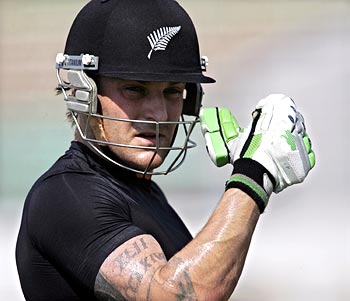 Brendon McCullum smashed a century and Scott Styris picked up three wickets to lead New Zealand to a 64-run win over Pakistan in the second one-day international on Friday.

Powered on by opener McCullum's 131, New Zealand posted 303 for eight and then bowled out Pakistan for 239 runs in 47.2 overs to square the three-match series at 1-1.

Salman Butt (59) and Khalid Latif (45) gave Pakistan a solid start by notching up 77 runs for the opening wicket in just over 16 overs before Pacer Styris triggered a middle order collapse.

Pakistan lost four wickets for 10 runs as Styris had Younus Khan (19) caught at midwicket by Ross Taylor. The two combined again one ball later to get rid off Shahid Afridi for a duck.

Kamran Akmal (4) also fell to Styris while Butt was eventually run out trying to steal a sharp single to mid-off to leave Pakistan floundering on 134 for five.

Kiwi skipper Daniel Vettori grabbed the wickets of Latif and Mohammad Yousuf (18) trapping both of them leg before.

Earlier McCullum notched up his hundred from 129 balls, smashing 14 fours and three sixes in an innings that propelled his team to a big score.

Wicketkeeper McCullum, who struggled to hit his best form in the recent Champions Trophy, tore into the bowling before getting a thick inside edge on to his stumps in the 47th over.

He reached his hundred from 107 balls.

© Copyright 2020 Reuters Limited. All rights reserved. Republication or redistribution of Reuters content, including by framing or similar means, is expressly prohibited without the prior written consent of Reuters. Reuters shall not be liable for any errors or delays in the content, or for any actions taken in reliance thereon.
Related News: Brendon McCullum, Scott Styris, Pakistan, New Zealand, Khalid Latif
SHARE THIS STORYCOMMENT
Print this article

Why India should worry about turmoil in Pakistan