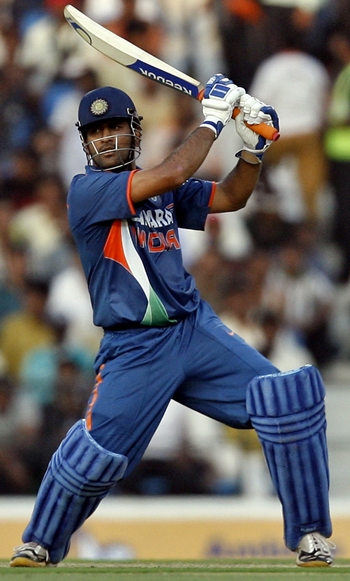 Nagpur's Vidarbha Cricket Association stadium became the 40th Indian ground to host a one-day international, when it staged the second India - Australia ODI in the seven-match series on Wednesday. It also became 174th ground in the world to host an ODI.

The VCA stadium is only the second ground in India to host a day-night match as debut ODI. Delhi's Jawaharlal Nehru stadium is the other stadium to have the honour.

India's total of 354-7 is their highest total against Australia, surpassing the previous best of 315 at Bangalore in 2001. It is also the fifth occasion when India scored 300 or more against Australia.

Dhoni's 124 is also the highest score by any captain against Australia, bettering Sri Lanka's Sanath Jayasuriya's 122 at Sydney in 2003.

The following table lists the highest scores by captains against Australia:

Dhoni's innings is also the highest by a captain-keeper in all ODIs, bettering Adam Gilchrist's 116 against Sri Lanka at Perth in 2006.

Dhoni's hundred is his fifth hundred in his 147th one-day international.

Suresh Raina's 62 is his 11th fifty in his 73rd one-day international. This is his first fifty against Australia in six matches. In his previous five matches against Australia he aggregated only 49 runs, with 26 as his highest score at Kuala Lumpur in 2006.

By conceding 83 runs in his 10 over spell, Hilfenhaus equalled Brett Lee's Australian record of conceding most runs against India (at Brisbane on 18-01-2004).

Michael Hussey scored his second successive fifty (53 off 60 balls). This was his 26th fifty in his 122nd one-day international.

Ravindra Jadeja, playing in his fifth match, achieved the best bowling performance of his career by taking 3-35. His previous best was 1-39 in his earlier match at Baroda on 25-10-2009.

India achieved their 350th win in 723 one-day internationals. Only Pakistan (381) and Australia (445) have registered more victories than India.

The 99-run win is India's fourth biggest against Australia. The details: