'I don't think ODIs are going to get extinct'

Former India captain Anil Kumble is the latest to join the debate on the future of one-dayers and has suggested that the 50-over version be shortened to 40 overs a side to save it from extinction.

With the advent of Twenty20 cricket, the future of ODIs is in jeopardy. The England and Wales Cricket Board recently scrapped a 50-over competition from its domestic calendar in 2010. 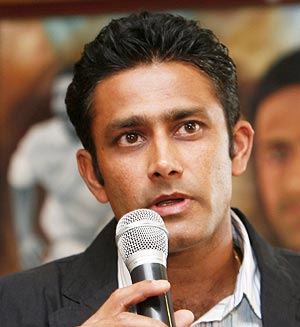 "I don't think ODIs are going to get extinct, but there is a little bit of threat on the development of the format. You need such innovations as Sachin (Tendulkar) suggested but my thought is is to shorten ODIs from 50 to 40 overs," Kumble said on the sidelines of Van Huesen India Men's Fashion Week in New Delhi.

Tendulkar recently suggested that to infuse new life into ODIs, the format should be split into four innings of 25 overs a side.

Kumble is part of an ICC panel formed to resolve the ongoing deadlock between the World Anti-doping Agency (WADA) and Indian cricketers over the whereabouts clause.

Kumble, however, refused to comment on the players' concern on WADA's contentious 'whereabouts clause'.

"I am representing ICC in WADA so I can't really say anything," he said.

The talismanic former national captain , who guided Bangalore Royal Challengers to the final of the second edition of the Indian Premier League in South Africa, feels Rahul Dravid's inclusion in the Indian ODI team will add balance to the already strong batting order.

"It's good to see Rahul's comeback in the ODI team. I am sure he will do well and his experience will be of great help for the team," Kumble said.

The 38-year-old former spinner, who has 619 Test and 337 ODI wickets in his 18-year career with the Indian team, also said that the Mahendra Singh Dhoni-led side will face a transition problem once the trio of Sachin Tendulkar, Rahul Dravid and VVS Laxman bids adieu to the game.

"They (Tendulkar, Dravid and Laxman) are still young and keen to play, so I think it's to early to predict anything, but any team will find it difficult to replace them. It is never easy to replace a Sachin Tendulkar," Kumble stated.