Following are the statistical highlights of the Champions Trophy match between India and Pakistan: 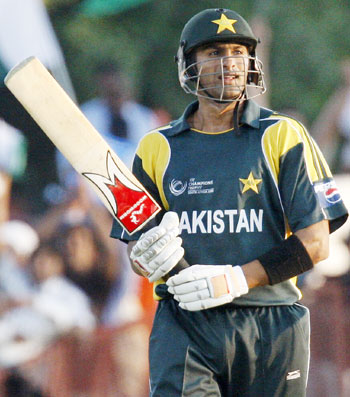 # Shoaib Malik has got his 15th Man of the Match award - his 5th against India. Malik's innings (128) is the highest individual score by a Pakistani in the ICC Champions Trophy.

# Harbhajan Singh, for the first time in his ODI career, has conceded 70 runs or more in an innings.

# Pakistan (302 for nine) has registered their highest total in the ICC Champions Trophy.

# Mohammad Yousuf-Shoaib Malik pair is the only one to have registered a double century stand in the ICC Champions Trophy.

# The aforesaid 206-run fourth-wicket stand is now Pakistan's highest in ODIs, eclipsing the 198 (unbroken) between Kamran Akmal and Misbah-ul-Haq against Australia at Abu Dhabi on May 3, 2009.

# Malik has posted his seventh century in ODIs - his fourth against India.

# Malik, during the course of his century knock, became the tenth Pakistani to have aggregated 5,000 runs or more,  amassing 5009 at an average of 35.27 in 183 ODIs. He is the second Pakistani all-rounder to accomplish the double of 5,000 runs and 100 wickets in ODIs.

# Ashish Nehra (4/55) has recorded his best bowling performance in the ICC Champions Trophy.

# Gautam Gambhir's innings of 57 off 46 balls is his third fifty against Pakistan.

# Pakistan has registered wins in both their ICC Champions Trophy games against India.

India concerned over latest US aid to Pak