India's semi-final chances suffered a big jolt as incessant rain led to the abandonment of their Group A Champions Trophy match against Australia, forcing them to split points at SupertSport Park. 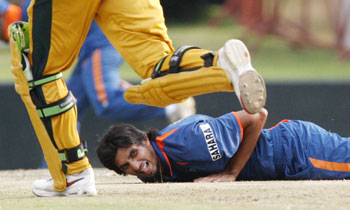 Now India will have to beat the West Indies by a big margin on Wednesday and pray that Pakistan too beat Australia by a good margin on the same day.

Australia were cruising comfortably at 234 for four in 42.3 overs when heaven opened up. The unrelenting rain turned the stadium into a virtual pool and lightning struck one light tower as well.

Electing to bat, Australia flourished on some fabulous partnerships after getting off to a slow start.

Skipper Ricky Ponting led from front with a crafty 63 and conjured up two crucial partnerships with Tim Paine (56) and Michael Hussey (67) to lay a solid platform for a big score.

Indian pacers Ashish Nehra and Praveen Kumar, who replaced RP Singh, bowled in tandem to give their side a decent start as they conceded just 23 runs in the first eight overs and also dismissed Shane Watson for a duck.

Australia broke the shackles in the eight over by milking the gangly Ishant for 16 runs as Paine hit him for a six and four and Ponting also drove him for a sweet four through the covers.

The pair grew in confidence after that fruitful over and went on to add 83 runs for the second wicket which was enough to stabilise the Australian innings.

Amit Mishra vindicated the decision of his drafting into the side with his disciplined bowling, which played a role on slowing down Australia's progress.

The leg-spinner provided the second breakthrough when he scalped Paine.

Ponting and Mike Hussey though went about the business very efficiently, working the field around, and erected a stand of 88 runs for the third wicket.

India had a fortuitous break when Gautam Gambhir, running in from deep midwicket, threw down the non-striker's end and caught Ponting short of his crease.

Ponting's 65 came off 88 balls and contained four fours and a six. Hussey though kept going strongly from the other end and soon completed his half century from 45 balls and inclus ive of four fours.

With lightning and dark clouds mushrooming on the horizon, Australia opted for their batting powerplay in the 36th over in the hope of advancing their score rapidly.

They made 44 runs and another half-century stand, this time between Hussey and Cameron White, had materialised.

Ishant put his bowling woes behind when he got Hussey  caught in the deep on the off-side. Hussey's knock came off 65 balls with the help of five fours.

With the score reading 234 for 4, the rain started pelting down at the Centurion forcing the cricketers indoors.