It was his highest ever score in the Indian Premier League. 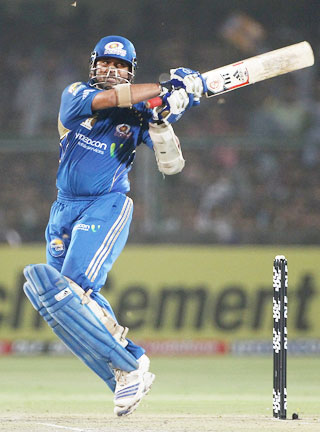 It ensured his team a spot in the semi-finals of the lucrative competition for the first time in three attempts.

And it helped him grab hold of the Orange Cap - for the highest scorer in the tournament with 512 runs - from Jacques Kallis' head.

You guessed it right - we are talking about Sachin Tendulkar.

The Mumbai skipper, shared a crucial 63-run fourth wicket partnership with JP Duminy (31) and then added 50 runs with Kieron Pollard (25) for the fifth wicket to help the table toppers recover from 30 for three.

Tendulkar, when on 45 was dropped by Aditya Dole off Siddharth Trivedi, and the Master Blaster made the Rajasthan side pay heavily for their blunder, smashing 20 in the bowler's final over.

During his knock he surpassed Royal Banngalore Challengers' Jacques Kallis tally of 501 runs and took possession of the Orange Cap.

And his side ensured that his record - of not losing a match having scored a fifty in this tournament - remained in tact for a fifth match in succession.