Injured Mortaza left out of Bangladesh squad against India 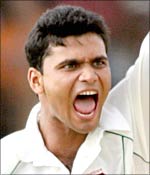 Injured pacer Mashrafe Mortaza was left out of the 14-member Bangladesh squad for the two-match Test series against India starting from January 17 in Chittagong.

Syed Rasel, Naeem Islam, Aftab Ahmed and Abdur Razzak were the four players named for cricket tri-series but left out of the Test squad.

Shakib Al Hasan, who led the side in their Test series victory in the West Indies last year, has been retained as the captain while Mushfiqur Rahim will also remain the vice-captain.

Mortaza was first named captain in the preliminary 24-member squad for the cricket tri-series but failed to figure in the final list as he failed to recover fully from a knee injury.

The second match of the Test series will be played in Mirpur from January 24.