Veteran fast bowler Chris Martin is among the 20 players, who have been handed New Zealand Cricket contracts for another year. 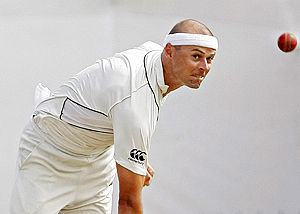 New Zealand coach and selector Mark Greatbatch said that despite being plagued by injuries, Martin still has plenty to contribute in the Test cricket arena.

He said that Martin has been retained, as the selection panel including skipper Daniel Vettori, Glenn Turner and John Wright, felt that he had another good 12 months of Test cricket in him.

"We think it is very easy to look in isolation at one or two Test matches at the end of summer, when he himself said those performances weren't at the level he wanted to aspire to," Stuff.co.nz quoted Greatbatch, as saying.

Greatbatch said that Martin's successes last summer, when he took 20 Test wickets, should not be overlooked.

"So, we still feel that he is going to help us in test cricket for the next 12 months. We expect him to step up further this year," he added.