Statistical highlights of the fifth day of the first cricket Test between India and Sri Lanka in Galle on Thursday. 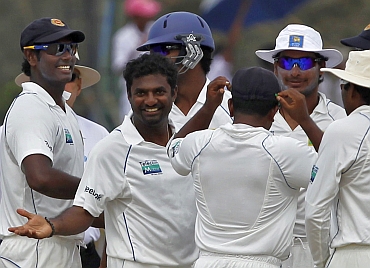 # Muttiah Muralitharan is the first-ever bowler to claim 800 wickets in Tests - his victim being Pragyan Ojha.

# Laxman and Mithun put on 49 - India's highest for the eighth wicket at Galle.

# Mithun (25) has posted his highest score in Tests.

# Laxman (69) has registered his highest innings in Sri Lanka.

# Laxman's 44th Test half-century is his seventh against Sri Lanka.

# Ishant Sharma (31 not out) has posted his career-best score in Tests, surpassing the 23 against Australia at Sydney in January 2008.

# Laxman and Ishant  have shared a partnership of 68 - India's highest for the ninth wicket at Galle.

# Sri Lanka's magnificent win by 10 wickets is their ninth in sixteen Tests at Galle International Stadium.

# The 24-run stand between Ojha and Ishant is a tenth wicket partnership record for India against Sri Lanka at Galle.

# For the sixth time in Tests,Harbhajan Singh has failed to take a single wicket.

# Dilshan's third half-century against India is his 14th in Tests.

# Lasith Malinga (64 + 2/55 + 5/50) is the first Sri Lankan all-rounder to post a fifty and capture five wickets in an innings in the same Test match against India.

# Malinga has received his second Man of the Match award in Tests.

# Sri Lanka have won two Tests out of three played against India at Galle.

# Malinga is the third fast bowler to claim five wickets in an innings at Galle, joining Dilhara Fernando (SL) and Javagal Srinath (India).

Muralitharan, Malinga have India in trouble