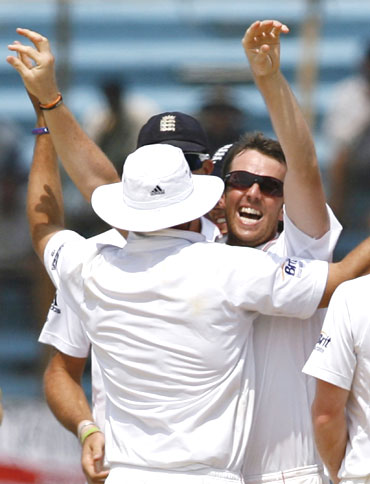 Graeme Swann completed a maiden 10-wicket haul to help England overcome some stubborn resistance from Bangladesh and register a 181-run victory on the fifth afternoon of the first Test on Tuesday.

Off-spinner Swann ended a battling 167-run sixth-wicket partnership in the second over after the lunch break to dash any hopes Bangladesh had to saving the match as England ran through the tail after struggling for more than two sessions.

Zunaed Siddique struck his maiden Test century and received valuable support from vice-captain Mushfiqur Rahim as Bangladesh saw off the morning session without the loss of a wicket in pursuit of a world record victory target of 513.

However, Zunaed was unable to add to his lunch score of 106, giving a catch to Paul Collingwood at slip after spending more than six-and-half hours at the crease and negotiating 292 balls in an innings which included 17 fours.

Coming together with the score on 110-5 around 20 minutes before tea on the fourth day, Zunaed and Rahim batted out more than two sessions to revive Bangladesh's faint hopes of getting something out of the match.

Once Zunaed departed, Rahim soon followed when he charged down the wicket to a Swann delivery but missed the line and was bowled for 95.

The diminutive wicketkeeper-batsman, who also scored fifty in the first innings, struck 12 fours in his 212-ball vigil.

England then raced through the tailenders as Bangladesh, who had resumed on 191-5, were eventually dismissed for 331 in their second innings.

Naeem Islam was the last man out, caught by Michael Carberry off Swann at midwicket after making 36 off 45 balls, blasting three sixes and as many fours in his cameo to give the handful of supporters remaining in the stadium something to cheer.

All but one of his boundaries came off Swann, who finished the second innings with figures of 5-127 and was named man of the match after his overall 10-217 performance.

The second and final Test starts in Dhaka on Saturday.

© Copyright 2020 Reuters Limited. All rights reserved. Republication or redistribution of Reuters content, including by framing or similar means, is expressly prohibited without the prior written consent of Reuters. Reuters shall not be liable for any errors or delays in the content, or for any actions taken in reliance thereon.

England in command against Bangladesh