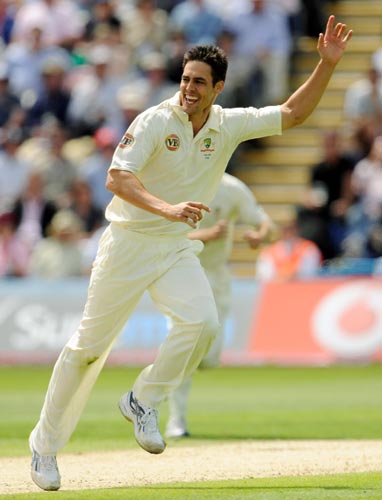 Australia completed an unbeaten 2009/10 campaign after a superb 10-wicket match haul by Mitchell Johnson saw them beat New Zealand by 176 runs in the second Test at Seddon Park, Hamilton, on Wednesday.

Chasing an unlikely 479 to win, the Kiwis were dismissed for 302 just before lunch on the fifth and final day despite half-centuries from Martin Guptill and Brendon McCullum, and late hitting from Tim Southee, who scored 45 off 25 balls.

The victory gave the tourists, who had beaten the West Indies 2-0 and Pakistan 3-0 during their home summer, a 2-0 series triumph. They won the first Test in Wellington by ten wickets.

Man of the match Johnson, who claimed six wickets for 73 from 20.1 overs in New Zealand's second innings, finished with match figures of 10-132, having bagged 4-59 in the first.

New Zealand resumed their second innings on the final day at 185 for five, still 294 short of the huge target and only their last two recognised batsmen at the crease. But Guptill and Brendon McCullum lasted 18.3 overs, stretching their sixth wicket partnership to 87 runs.

McCullum registered his 16th Test half-century off 93 balls, but was out after scoring just one more when he cut a Doug Bollinger delivery to Michael Hussey at gully off the third delivery with the second new ball.

Jeetan Patel, promoted to No 8 for the Test, lasted 10 deliveries before becoming Bollinger's second victim of the innings.

Guptill battled for 205 minutes and 157 balls but was out trying to hit Johnson through the covers; he edged the ball to Ponting at second slip and was out for 58.

Johnson then had Brent Arnel caught behind for a duck.

Southee also waged a solid battle and took the Kiwis past the 300-run mark before Johnson had him caught on the cover boundary by Michael Clarke after hitting seven fours and a six in scoring 45 off 25 balls.