Muttiah Muralitharan, the highest wicket-taker in ODIs and Test cricket, is all set to make a surprise farewell tour of Australia. He also declared his intentions to play the 2011 World Cup in the subcontinent.

Murali, who retired from Test cricket in July with a record 800 wickets, told Sri Lankan cricket officials that he is keen to continue playing one-day cricket. 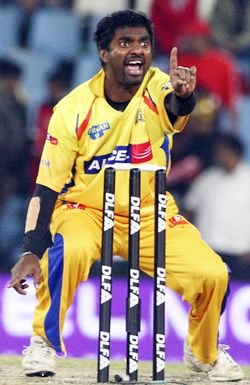 Sri Lanka will tour Australia in November and Murali has made his intentions clear to play three one-dayers.

The first one-dayer, at the MCG on November 3, will witness Murali back in action.

Sri Lankan selectors have yet to formally pick Murali in their tour squad for Australia but it is impossible to imagine them overlooking the man who is adored in his homeland, The Daily Telegraph reports.

"Murali wants to pick and choose his tours for the shorter version of the game ... but he has said he is available for selection for the forthcoming tour of Australia. He has also indicated his availability for the World Cup," a source close to Murali told the paper.

Murali has not played international cricket since July but was part of the Chennai side that recently won the Champions League Twenty20 tournament in South Africa.

Tamil actor Murali is no more