Statistical highlights of the second ODI between India and Australia, at Visakhapatnam, on Wednesday.

# White's outstanding unbeaten 89 off 49 balls is his highest innings against India, eclipsing the 62 at Mohali on November 2, 2009.

# The 137-run third-wicket partnership between Kohli and Yuvraj is the highest for India at the venue.

# Suresh Raina's third fifty against Australia is his 16th in ODIs.  His superb unbeaten 71 off 47 balls is his ninth fifty in 27 innings in India.

# Clint McKay (3/55) registered his best bowling figures against India, obliterating the three for 59 at Hyderabad on November 5, 2009. 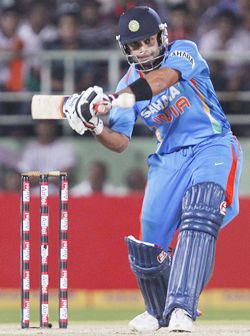 # Mahendra Singh Dhoni's first duck as captain is his sixth in ODIs. The said innings is his first duck against Australia.

# India recorded their third victory at this venue. Their first two wins being against Pakistan by 58 runs on April 5, 2005, and by seven wickets against Sri Lanka on February 17, 2007.

# India (292 for five) posted their highest successful chase against Australia, bettering the 275 for four at Sharjah on April 24, 1998.

# Yuvraj is averaging just 28.28 against Australia -- 905 in 32 innings, including two hundreds and three fifties.

# In 78 matches in India, Yuvraj has scored five centuries and 15 fifties.

# Kohli's first three-figure innings against Australia is his third in ODIs.

# Kohli has been adjudged the Man of the Match three times -- his first two were against West Indies and Bangladesh and Australia.

# Michael Clarke recorded his fifth century in ODIs â his second against India. He posted two centuries and three fifties in 16 games as captain.

# Clarke is the third Australian captain after Ricky Ponting and Mark Taylor to register a century against India on Indian soil.

# Clarke's magnificent knock is his highest as captain.  The said innings is also the highest by an Australian captain against India in India.

# Clarke and Hussey were involved in a stand of 144 â the highest partnership for the third wicket at the venue.

China a tech powerhouse; why India must catch up