No match-fixing in IPL, says Warne 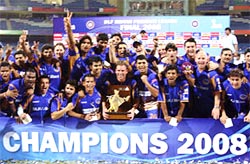 Cricket Australia on Monday refuted reports that two of its players were under the International Cricket Council's scanner for suspected involvement in match-fixing during the Indian Premier League's second season last year.

CA's rebuttal came after British newspaper The Times reported that of the 29 players cited by the ICC's anti-corruption and security unit for suspected involvement in match or spot-fixing, it was "thought there are two Australians" on the list.

The newspaper quoted an unnamed source as saying that "some betting patterns were very suspicious at IPL 2" which was held in South Africa last year.

"In the time I have played in the IPL, I have never been approached or heard anything at the Royals regarding match-fixing," said Warne.