The umpires officiating the controversial Lord's Test felt that Pakistan bowler Muhammad Amir had delivered a deliberate no-ball during the fourth Test against England, but had put it down to tactics rather than spot-fixing at the time, local media reported.

New Zealanders Tony Hill and Billy Bowden had been concerned by an Amir delivery to England's Jonathon Trott during which the teenage bowler overstepped the mark but pitched the ball short. 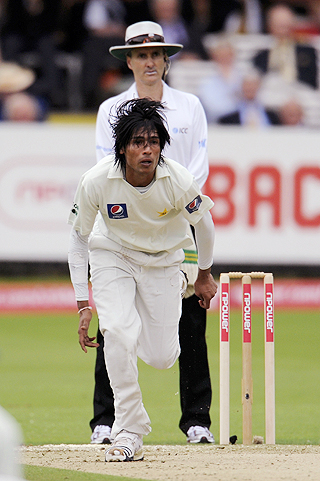 "We never suspected a thing," Hill told the Dominion Post. "There had been the big overstep in particular and in our minds that was more a deliberate overstep to have a go at Trott, who had been batting so well.

"Billy and I chatted about that and thought it seemed deliberate, especially as it was dropped in short. But it all seemed to be one of those things that fast bowlers have been known to do to get an advantage."

Amir, Salman Butt and Mohammad Asif were suspended by the International Cricket Council following a British newspaper report that Amir and Asif had bowled three deliberate no-balls by pre-arrangement on the opening day of the fourth Test.

The trio have returned to Pakistan on the condition they be available for police questioning when required and are scheduled to attend an ICC hearing next month.

Police in Britain have since questioned a fourth player Wahab Riaz over the spot-fixing allegations.

"It was my first Test at Lord's," Hill added. "It was a special place but it ended up being a game that will be remembered, but not for the right reasons."

Pakistan lost the Test series 3-1 and are currently 2-0 down in their five-match One-Day series.

© Copyright 2020 Reuters Limited. All rights reserved. Republication or redistribution of Reuters content, including by framing or similar means, is expressly prohibited without the prior written consent of Reuters. Reuters shall not be liable for any errors or delays in the content, or for any actions taken in reliance thereon.
Related News: Muhammad Amir, Tony Hill, International Cricket Council, Billy Bowden, Mohammad Asif
SHARE THIS STORYCOMMENT
Print this article