Team India failed to learn from past mistakes 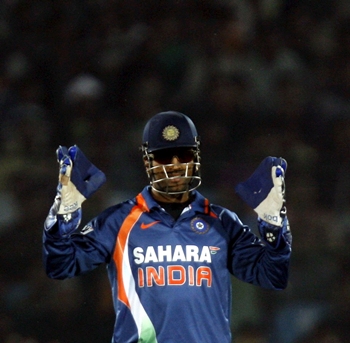 India have the best Twenty20 tournament, or rather the most popular one, in the IPL, but it hardly serves the purpose on the world stage, says Harish Kotian

When you err the first time, you can be excused. But when you repeat the mistake, you deserve to be castigated.

The same holds for India's pampered cricketers after yet another mediocre performance and the humiliating exit from the ICC World Twenty20.

Barring Suresh Raina's match-winning century against South Africa and the hollow win over Afghanistan, the Indians were outplayed in all three matches of the Super Eights.

It seems Mahendra Singh Dhoni used up all his intelligence and stamina to steer Chennai Super Kings to the Indian Premier League crown and had nothing left for the bigger T20 bash in the Caribbean.

Ian Bishop, speaking after Sri Lanka's six-victory over India, rightly observed that "the Indian team needs to give more time and thought to these global tournaments".

Team India's lack of interest in global tournaments can be gauged from the fact that they did not care to play a single practice match ahead of the World Twenty20. The players were of the notion that the IPL provided them enough match practice. What they forgot to take into account were important factors like weather and pitches.

Pitches are never the same in two countries, and it was proved to the full when India's batting stars from the IPL looked completely out of place against the quick bowlers in the West Indies.

Australia's pacers exposed India's weakness against short deliveries and the West Indies took a cue from it. Sri Lanka, though, quite smartly, did exactly the opposite by pitching the ball up regularly, leaving the Indian batsmen, who were waiting deep in their crease expecting the bouncer, shell-shocked.

The case was similar at last year's World Twenty20, in England, when India never looked interested, going into the tournament on the back of a gruelling schedule in the IPL. Then too they did not have any serious practice session before or during the tournament.

Having won the inaugural tournament in 2007 against all expectations, they have been shown their rightful place in the following editions.

India's dilemma is similar to that of England's football team, which, despite boasting of the most popular league and some of the world's best clubs, never makes an impact on the international stage.

India also have the best Twenty20 tournament, or rather the most popular one, in the IPL, but it hardly serves the purpose on the world stage. They are atop the ICC Test rankings and second in the ODI list, but rank way below at seventh in Twenty20 internationals, according to the ratings on cricket20.com.

Statistics during the World Twenty20 reveal the true picture of India's campaign. Raina was the only batsman to get past the 200-run mark in five matches, while the top batsmen -- Mahendra Singh (85 runs), Yuvraj Singh (74) and Gautam Gambhir (69 runs) -- all failed to fire.

The bowlers, too, except Ashish Nehra (10 wickets), did not come to the party.

After all the parties during the IPL last month it was but natural to expect the prima donnas of India cricket to come out blazing at the World Cup. The perfect example was Gautam Gambhir's innings in India's final match against Sri Lanka, where he was content to stroll along for singles and never pushed himself. Despite not scoring much before that match, the strain was evident and he even excused himself when India fielded.

Captain Dhoni perfectly summed up the flop show in the Caribbean.

'Most of the players were fit and fresh. Players also need to be smart, not only about cricket but about other things going around in the IPL. We have to respect our bodies and give some time for it to recover because there is more to it than playing matches. Attending parties and traveling takes a toll,' he pointed after the team's exit.

Wonder what excuse he'll have the next time, because IPL-4 will have two more teams and a total of 94 matches -- 34 more than this year's tournament.

The bigwigs of the Board of Control for Cricket in India certainly need to spare some time from their ego clash with Lalit Modi and get to on-field cricket action.