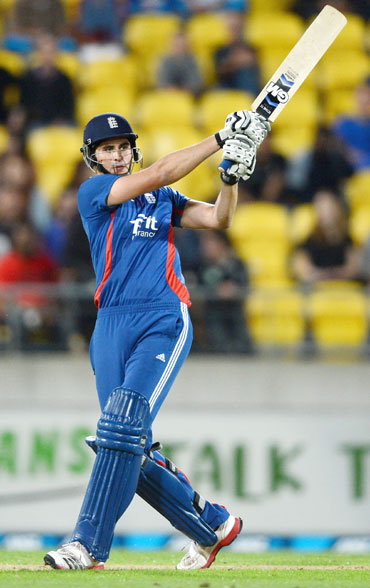 England 84-1 (16 ovs)  vs New Zealand| Scorecard
England batsmen are unable to push the scoring here and are just happy with taking the singles and twos.
Santner continues and Root sweeps the ball for a single to fine leg.
Hales gets a run to cover.
Root then gets to 2 runs down to point.
Root then drives the ball for a single and Hales gets another single off the last ball of the over.
Anderson continues, some sloppy fielding by captain Williamson at cover allows Hales to pinch a single.
Root then gets a single.
Hales gets a dot ball and then a wide ball by Anderson adds to the extras column in the scorecard.
A dot ball later, Hales again pulls the ball for a single.
Root ends the over with a run off his pads down to backward square leg.
Santner continues and nearly strikes! Hales gets the leading edge and the ball goes flying jusrt
Root comes dancing down the track and sends the ball over long-on for a six!
He then gets a single down to cover.
Hales then gets a single to extra cover. A dot ball to end the over and that is nine runs off the over.
« Back to LIVE