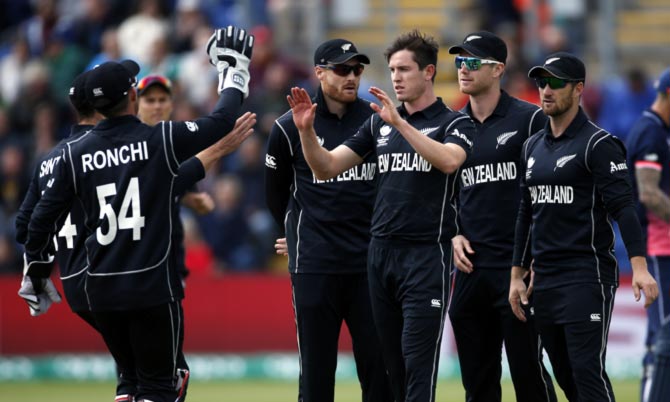 England 150-3 (27 ovs)  vs New Zealand | Scorecard
Anderson continues. He bowls it on the pads and Root flicks it behind mid-wicket for a single.
Stokes plays out three dot balls.
Stokes then plunders Anderson for a six over mid-wicket! What a pull!
Stokes hares down the pitch for a single after a misfield at cover.
Santner gets the ball back.
He starts with a dot and then Root gets to his 50! 50 off 52 balls. What a strike rate. No fuss batting this by the England number 3 bat.
Stokes gets off the mark with a single down the ground.
Root plays a paddle sweep and a superb effort on the boundary by Taylor but he makes contact with the boundary while touching the ball. That is a four to Root.
Root gets a single to end the over.
Anderson continues and Root takes a single off the second ball with a strike down the ground to mid-off.
Morgan gone!
He chases a wide and edges it to give Anderson a wicket.
Ben Stokes replaces Morgan at the crease. He faces three dot balls and is yet to get off the mark.
Boult continues, it's his 5th over.
Morgan gets no leverage as three dot balls are bowled.
Next ball is punched down the ground for two. He follows that with a four, a short ball and he pulls it behind square. He ends the over with another two.
« Back to LIVE