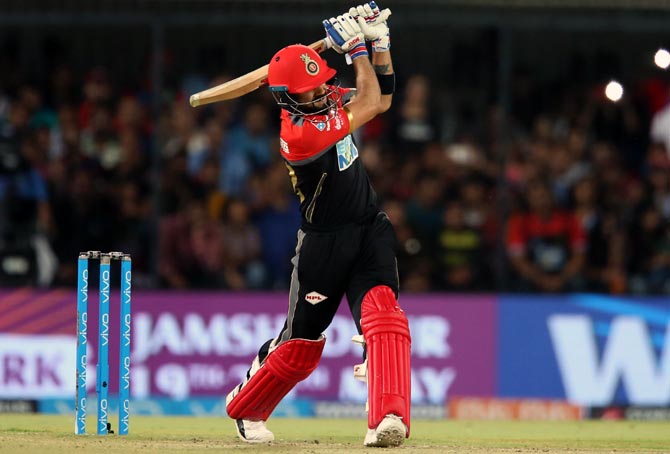 RCB 36-0 (3 ovs) vs Punjab 88 | Scorecard
Captain Ravichandran Ashwin to open the bowling for Punjab, who will need a miracle with the ball to clinch victory after their poor effort with the bat.
Captain Virat Kohli makes his intent clear as he walks out to open the batting with Parthiv Patel.
Five singles from the first five balls before Parthiv pulls the last ball for a four to get nine runs from the over.
Andrew Tye to bowl the second over. Punjab miss a golden opportunity to dismiss Kohli early as Ashwin fails to hit the stumps from mid-on with the RCB captain struggling to make his crease.
Parthiv then clips the next ball past short fine leg for a four and then crashes the next through the off-side for a four before he gets two runs off the last ball courtesy of an overthrow.
Just one over for Ashwin before he brings in pacer Ankit Rajpoot. Kohli gets after the young fast bowler, flicking the first ball over midwicket for a six.
He swings the next ball through the same region but this time it goes for a boundary before Rajpoot bowls a wide.
Kohli then makes room and carves the fourth ball over the off-side for another boundary.
Kohli looks to loft the next down the ground but gets it off the toe end as Finch puts down a difficult catch to give the RCB captain a second lifeline.
RCB are off and running as they race to 36 for no loss in three overs.
« Back to LIVE

Why Kohli changed his name to Simranjeet...

On Monday, during Royal Challengers Bangalore's opening game against SunRisers Hyderabad, in Dubai, the players wore jerseys sporting "My COVID Heroes" to pay tribute to the "Real Challengers".