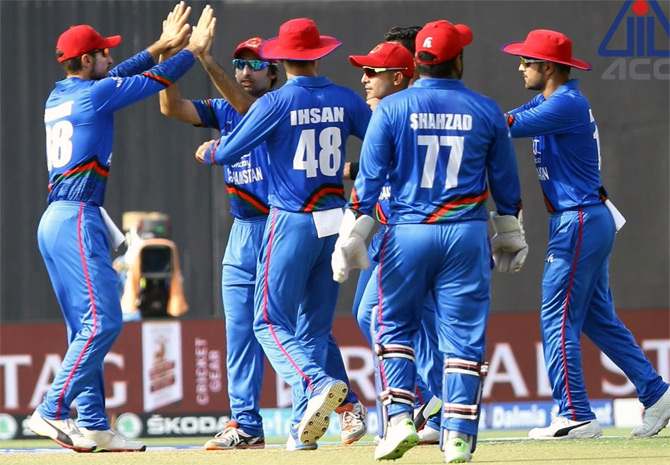 India 114-1 (18 ovs) vs Afg 252-8 | Scorecard
Rahul taps Nabi on the off-side for a single to take India past the 100-run mark, in the 16th over.
Rayudu turns the next ball on the leg side for one to race to his fifty from 43 balls, having hit three fours and four sixes.
Leg-spinner Rashid Khan comes into the attack but no stopping Rayudu, who slog sweeps the third ball for a four over midwicket.
But Nabi makes the breakthrough in the next over with the wicket of Rayudu. He looks to hit a straight six but fails to get enough power and is caught at long-on for 57.
Rahul, who crossed over while the catch was taken, clips the next ball from Nabi on the leg side to complete his fifty from 55 balls.
Dinesh Karthik, at No. 3, gets off the mark with a single before Rahul slaps the last ball straight down the ground for two runs.
« Back to LIVE

Sachin Tendulkar said that even if the ball is kissing the stumps or just brushing it, the decision should go in favour of the bowlers.

The Bollywood megastarwas rushed to Mumbai's Nanavati Hospital on Saturday night after he tested positive for coronavirus.

The man, son of retired SBI employees, had readied fake seals and challans of the public sector lender, and had other paraphernalia like a cash counting machine needed 'to run a bank branch', on an upper floor of his residence at...

The round involving Shubhankar Sharma, Gaganjeet Bhullar, Kapil Dev and Murali Karthik was termed 'Champions for a Cause - Charity Golf Match'.

The gangster's wife, Richa Dubey, their son and maid were kept at a mahila police station in Kanpur after being brought from their Krishna Nagar residence in Lucknow for questioning, a police official said in Kanpur.