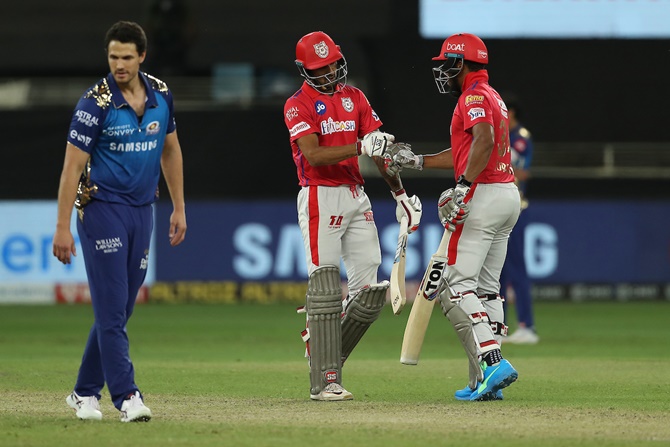 Mumbai 176-6 (20 ovs) vs Kings XI 176-6 (20 ovs)
Coulter-Nile bowls the 19th over, Hooda takes two quick singles. Short ball and Hooda hammers it for four runs between short third man and backward point. Hooda is dropped by Chahar. He will get a single. Same short, with more power, four runs to Jordan. Two more quick singles for Jordan. Jordan is beaten off the last ball.
After 19 overs Kings XI are 168-5. They need 9 from 6 balls. Jordan is on 7 (5) and Hooda is on 21 (13).
Boult bowls the last over, Hooda takes a single. Coulter-Nile dropped but saved three runs. Yorker and Jordan slams a boundary. Edge and went past Quinton. Jordan takes a single now. Kings need 3 off 3 balls. Hooda tries to sweep but no runs. Bowls too wide, Hooda gets his bat to it, takes a single.
Kings need 2 off 1 ball. Rohit calls his fielders inside. Jordan goes for second run but he takes a roundabout way to make it and he is out! One bounce and Pollard throws and Quinton does the rest.
Match tied! We have a super over! Second super over of the day!
« Back to LIVE