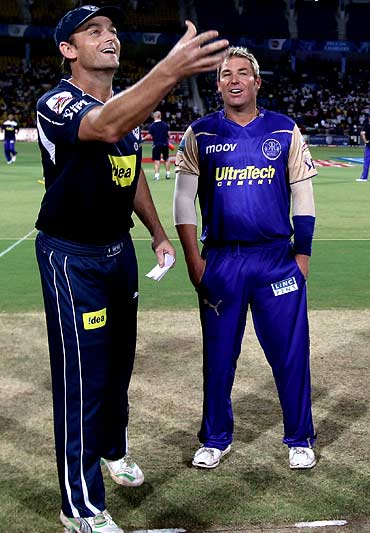 Australian cricket legends Adam Gilchrist and Shane Warne at the toss before the start of the Indian Premier League match between Deccan Chargers and Rajasthan Royals in Nagpur, on Monday.

Warne won the toss and had no hesitation in electing to bat.

Rajasthan dropped Shaun Tait and brought in Morne Morkel in his place, while also including Siddharth Trivedi and Aditya Dole.

For Deccan, West Indies all-rounder came into the team at the expense of Herschelle Gibbs. Pacer RP Singh also made his long awaited comeback for the champions.

Rajasthan Royals went on to win the match by two runs. 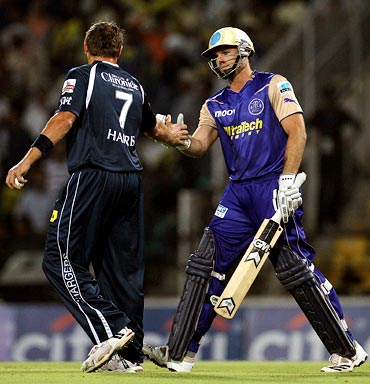 The match started on a dramatic note.

Off the very first delivery of the match, pacer Ryan Harris, after a few juggles, appeared to have caught Michael Lumb (15) off his own bowling.

The Hampshire batsman, having got the nod from Harris that he had taken the catch walked back to the pavilion, but television replays suggested that the ball touched the ground.

The batsman was called back and he celebrated his reprieve by smashing the ball over long-off for a maximum.

One that Harris did not miss 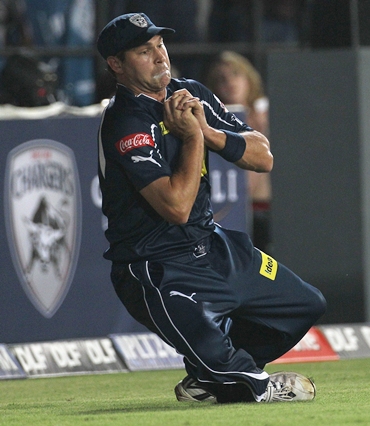 Lumb celebrated his reprieve by smashing the ball over the long-off for a six. The South African continued his aggression by hitting Dwyane Smith for successive boundaries in the second over.

However, the introduction of RP Singh in the third over translated into two wickets for the home side. First, Lumb was out. The left-hander was caught by Harris at deep midwicket -- and on this occasion there was no doubts about the catch.

The bowler-fielder duo combined yet again two balls later to account for Naman Ojha  (1), this time the catch being taken at cover. 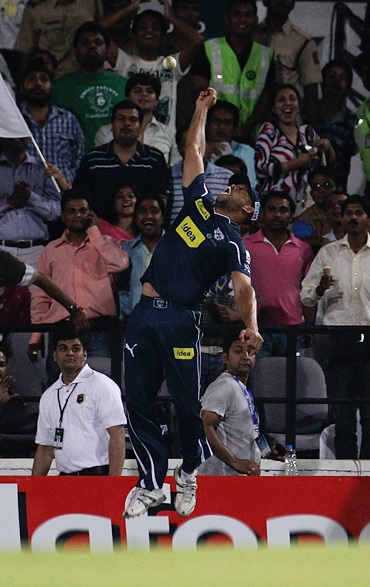 Image: Symonds leaps high but fails to catch the ball

Shane Watson eased the pressure a bit by pulling Harmet Singh over midwicket for a six in the next over.

The Australian was fortunate when Harris dropped him deep midwicket off the bowling of Andrew Symonds in the sixth over. Watson expressed his gratitude by smashing the very next ball over long-on for his second maximum.

Watson was lucky again as Symonds dropped a difficult chance on the long off boundary off the bowing of Pragyan Ojha. He got his hand to the ball only to deflect it for a six. 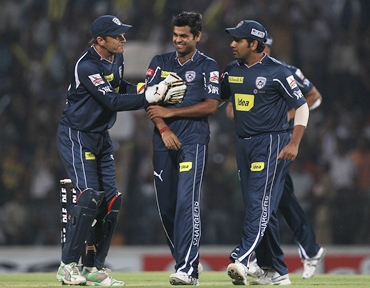 Watson's was the most vital of them all. He had the Aussie caught by Anirudh Singh at deep square leg. 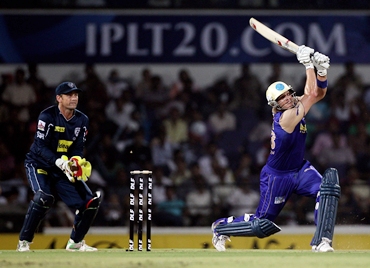 Shane Watson scored a superb half-century as Rajasthan Royals posted a competitive total of  159 in 19.5 overs.

The Australian all-rounder, the player of the tournament in the first edition but playing in only his second match this season, registered his sixth IPL fifty, his second on the trot -- following a 60 against Chennai Super Kings on Saturday.

His 36-ball 58 was inclusive of three hits to the fence and three over it.

Watson gets a thrashing 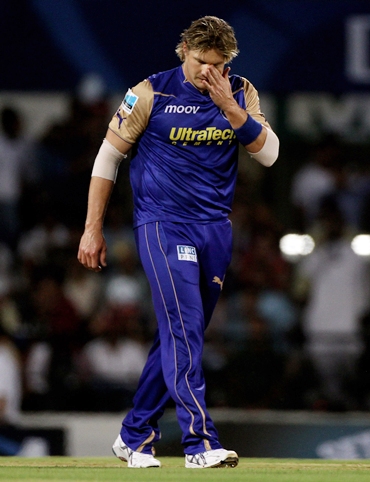 Having excelled with the bat for Rajasthan, Shane Watson started woefully with the ball, in the second over of the Chargers' innings.

The Australian had four wide balls in his opening over before allowing Adam Gilchrist to break free, first with a six over long-on and then successive boundaries -- the over costing Rajasthan a whopping 20 runs.

Gilchrist on the rampage 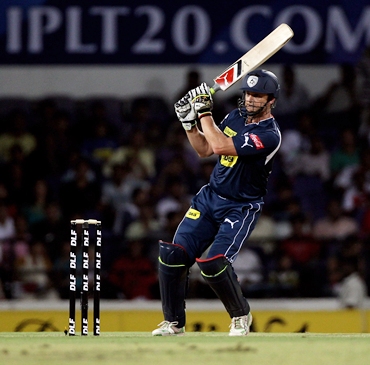 Gilchrist plundered 17 runs in debutant Aditya Dole's second over, including successive sixes, before the bowler had him caught by Michael Lumb in front of square leg.

It was yet another interesting cameo from Gilchrist, and another instance when he had failed to convert a good start to something more significant.

His 17-ball knock of 34 comprised three boundaries and an equal number of sixes. Captain Shane Warne was the best bowler for the Rajasthan Royals, finishing with impressive figures off four for 21, his best in the shortest form of the game.

The match was essentially a battle between Rohit Sharma, the young Deccan batsman, and Warne.

In the end, it was the veteran's experience that got the better of the youngster's aggression. 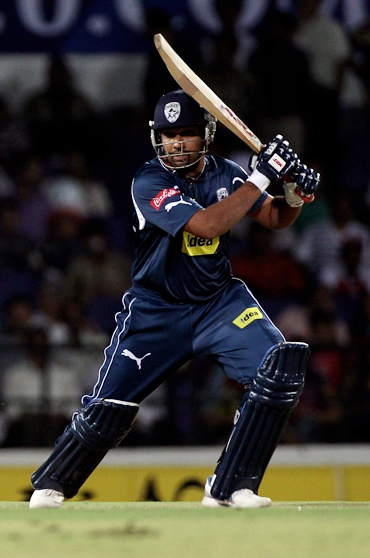 19 runs were off their final two overs and Rohit smashed the first delivery of the penultimate over by Morne Morkel to the long-on fence. Four balls later, he cleared the fence for a maximum, and just six were required off the final over.

But there was drama in store. Siddharth Trivedi had RP Singh (3) caught by Morkel at mid-on. And then Harmeet Singh (1) was run-out in a bizarre manner - when the third umpire had to be summoned.

And when Sharma was caught by Abhishek Raut at extra cover in the penultimate over, it was all over.

Rohit (73) registered a fifth IPL fifty while also becoming only the fourth batsman to have more than 1000 runs in the tournament - after Adam Gilchrist, Suresh Raina and Matthew Hayden.

His 44-ball knock, inclusive of eight hits to the fence and two over it, almost did the trick for the home team.