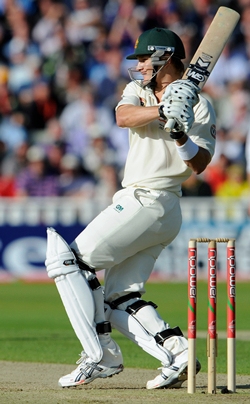 Australia recovered from a top order collapse in their second innings to end Day 3 in the first Test 307 runs ahead of Pakistan at the MCG on Monday.

After dismissing Pakistan for 258 just before tea for a first-innings lead of 196, they were 111 for 3 at stumps.

Shane Watson, unbeaten on 64, will be looking to earn Australia's first century this summer when he returns to the crease on Tuesday with Michael Clarke (21 not out). The pair steadied the innings after it was reduced to 40 for 3.

Mohammad Asif had Simon Katich (2) caught behind in the seventh over and Mohammad Aamer struck four overs later, claiming the wickets of Ricky Ponting (12) and Mike Hussey (4) in successive overs.

But Watson, who missed out on a maiden Test hundred while scoring 93 on the first day of the Test, and Clarke batted sensibly to retain the ascendancy they had gained earlier in the day.

Doug Bollinger took three wickets with the new ball to finish with 3 for 50 and Mitchell Johnson 3 for 36 as Pakistan's last five wickets fell for 68 runs after lunch, their first innings folding in 99 overs.

Australia captain Ricky Ponting will rue dropping Misbah-ul Haq on 22 in the penultimate over of the morning. Mitchell Johnson lured the batsman into playing a wide, full delivery and the ball flew straight to Ponting, at second slip, who dropped the easy chance. Misbah went on to finish unbeaten on 65.

Teenage batting sensation Umar Akmal (51) came up with another good show. He brought up his fifty after Johnson  replaced Siddle, whom he smashed for 19 runs in one over. However, the 19-year-old, who registered his fourth half-century in just his fourth Test match to go with the ton he scored on debut in New Zealand last month, got too adventurous and lost his wicket when he slashed at a wide delivery and Ponting in second slip held the catch.