Australia laid low by another injury as Siddle heads back home 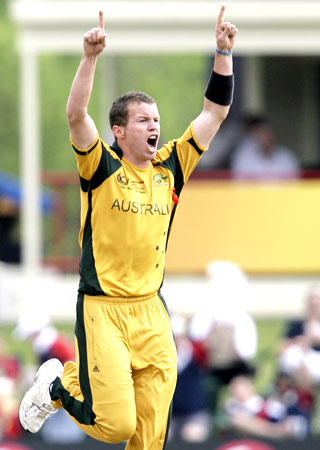 Injury woes continue to hound the Australian cricket team in the ongoing ODI series against India with pacer Peter Siddle becoming the latest to head back home due to a side strain he picked up during the fourth One-dayer in Mohali.

"Cricket Australia today confirmed Australian fast bowler Peter Siddle will return from Australia's Tour of India after experiencing some left side stiffness during last night's victory over India in the fourth ODI at Mohali," CA said in a statement.

Siddle bowled just five overs during Australia's 24-run victory on Monday and physiotherapist Kevin Sims said that though the injury was not very serious, he did not want to take a chance with the pacer's fitness.

"Peter's injury does not appear to be a serious problem but it is unlikely he will be able to safely bowl within the next week which would therefore not allow him to have any further participation in the tour.

"With this in mind we have made the decision that Peter will return to Australia where he will be reviewed by Cricket Australia's medical staff to ensure he is available for selection at the beginning of the Australian summer," Sims said.

CA's national selection panel is currently discussing the possibility of a replacement player joining the squad and an announcement would be made later.