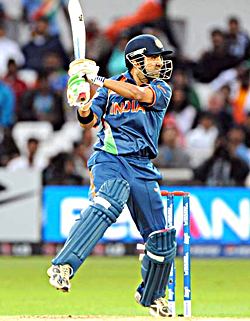 India's tri-series cricket campaign received a jolt on Thursday when left-handed opener Gautam Gambhir was ruled out of the event because of a groin injury.

"Gautam Gambhir has strained his groin muscle and has been advised rest for ten days," BCCI secretary N Srinivasan said in a statement.

"He will be returning to India." he added.

Gambhir's return means India will be without both their regular openers since Virender Sehwag is already out of action, recovering after shoulder surgery.

In the absence of Sehwag, Gambhir was expected to open with the seasoned Sachin Tendulkar and shoulder bulk of the responsibility.

The setback could not come at a more inopportune time and will no doubt disturb the combination at the top of the order.

With the regular pair of Sehwag and Gambhir sidelined, the experienced Sachin Tendulkar and Dinesh Karthik, who has opened the innings in recent times, is likely to take up the responsibility.

Interestingly, conditions in Sri Lanka will not be totally alien to the 20-year-old Kohli, who played all five of his ODIs in Sri Lanka last year before falling out of favour.

I will again start from zero: Gambhir