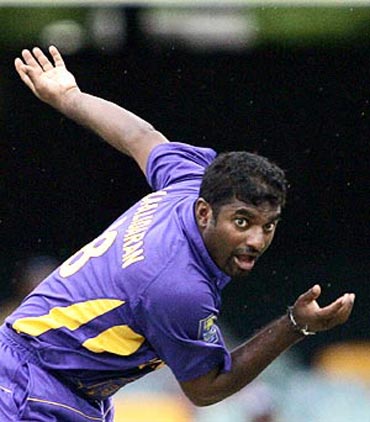 Australian spin legend Shane Warne has given a clean chit to Muttiah Muralitharan's action, saying he did not think the retiring Sri Lankan tweaker was a chucker.

"Murali's action has been passed by scientific tests... I always thought it was probably legitimate," Warne said.

"But because of the way he bowled, I was worried that young spinners would try to copy his action and end up bowling illegally," the Australian said of his one-time great competitor.

Muralitharan has already announced that he will quit the longer version of the game after the first Test against India starting Sunday at Galle.

And Warne said with the off-spinner's retirement world cricket will lose one of its great competitors.

"Murali simply loved bowling - he loved a challenge (and) was fantastic for the game," he told the Herald Sun.

"Sometimes he would pick my brain about different things and, although we always tried to outdo each other, we always got on well," he added.

Warne also feels that it will be a Herculean task for any other bowler to achieve Muralitharan's world record of Test wickets.

Warne retired with 708 Test wickets while Muralitharan has 792 scalps to his credit but still has one more match to take his tally to 800 wickets.

"I don't think it will ever be broken. Even though so much more Test cricket is played these days, I think Murali's record will stand for a long, long time and probably forever," Warne said.

"You just have to work it out by numbers - for that record to be broken someone has to play 140-150 Tests and take 5-6 wickets a Test. That will take some doing," he added.