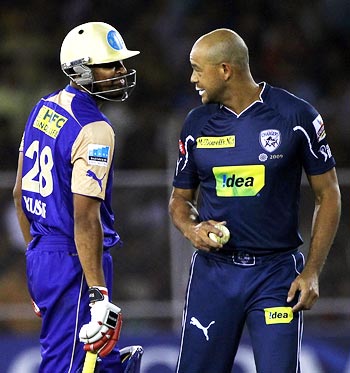 "When somebody from the opposition involves in sledging you are more pumped up to do well. When I went in to bat, Symonds said a few words and after that I was determined to perform with the bat," Pathan said after Rajasthan registered a convincing eight-wicket victory to register their straight victory in the tournament.

Yusuf was at his belligerent best as he slammed a quickfire 73 from 34 balls, a knock that included eight huge sixes and two boundaries.

The dashing all-rounder, who was named Rajasthan's vice-captain ahead of the match, said the crowd support helped him a lot.

"The support from the crowd kept me going. The ball was coming nicely on to the bat. It feels good when you are hitting the ball well."

He also added that it was satisfying to have played a match-winning knock with his parents in the crowd.

"My parents have been coming to watch my batting for the last two games and I am happy that I got some runs," Pathan said.