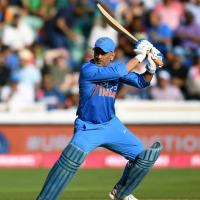 23:41   Dhoni's late attack lifts India to 148
India 148-5 (20 ovs) vs England | Scorecard
Jordan to bowl the 19th over. Dhoni turns the first ball through the covers for a couple followed by a quick single.
Jordan then bowls two good yorkers in a row to Pandya, who can only defend it.
But Pandya makes up for it as he clobbers the fifth ball down the ground for a six over long-on.
He punches the last ball through the leg side for a couple of runs to get 11 from the penultimate over.
Pacer Ball to bowl the final over. He starts with a short ball as Dhoni pulls it to deep square leg where the fielder fumbles to give away two runs.
Dhoni then takes a couple of steps down before smashing a slower bouncer straight back past the bowler for a four.
Ball tries the slower bouncer but misses his radar to give away a wide.
Dhoni then pulls a short ball to deep midwicket just for a single before Pandya is foxed by a slower bouncer which falls just short of wicketkeeper Buttler, who is unable to stop it and ends up giving away four byes.
That is ruled a no-ball as the pacer ends up giving away a free hit which Ball does well to concede just one with a full delivery to Pandya.
Ball makes the mistake of bowling length to Dhoni, who hammers it straight down the ground for a four.
The last ball is short as Dhoni pulls it for a four to get 22 runs from the final over as India finish on 148 for five from their 20 overs.
A good cameo from Dhoni at the end, stroking his way to an unbeaten 32 from 24 balls, while Pandya made 12 not out from 10 balls.
Read more >
23:28   Kohli out for 47; India lose 5th wicket
India 115-5 (18 ovs) vs England | Scorecard
Pacer Willey, who bowled two good overs with the new ball, comes back. Kohli taps the first ball to deep square leg for two runs before he picks another couple by tapping the third ball for another couple.
A single to Kohli followed by a leg bye to Dhoni before the India captain picks another two runs off the final ball of the over as India go past the 100-run mark, after 16 overs.
Jordan comes back as singles come from the first three balls before Kohli flicks a full toss over square leg for a six.
A single to Kohli off the fifth ball as Jordan gives away 10 runs in the 17th over.
Willey strikes with the big wicket of Kohli, who pulls a short ball straight into the hands of Joe Root, who does well to take a low catch diving forward.
Kohli hit a quick 47 from 38 balls, having hit two sixes and a four, but loses his wicket at a wrong time as far as India is concerned.
A single each to Hardik Pandya and Dhoni before the former takes two runs to deep square followed by a dot ball.
Willey gives away just four runs in his final over which dismissing the well-set Kohli and finishes with splendid figures of one for 18 in four overs.
Read more >
23:14   Raina out for 27; India 4 down
India 93-4 (15 ovs) vs England | Scorecard
Plunkett, who has conceded just 10 runs in his first three overs, comes back. He attempts a short ball but Mahendra Singh Dhoni manages to pull it comfortably behind square for a four.
He then takes a single off the fourth ball before Kohli takes a couple next ball as Plunkett ends with impressive figures of one for 17 in four overs.
Rashid to bowl his fourth and final over. He starts with four dot balls in a row to Dhoni, who then makes a good comeback by flicking the fifth ball over midwicket for a four.
Just four runs from the over as Rashid finishes with one for 29 in four overs, having conceded just seven runs from his final two overs, while taking the wicket of Raina.
India will be hoping for a strong finish to end up with a 150-plus total as they reach 93 for four in 15 overs, with Kohli on 32 from 29 balls and Dhoni on 11 from 12 balls.
Read more >
23:04   Raina out for 27; India 4 down
India 82-4 (13 ovs) vs England | Scorecard
Raina tries to sweep Rashid but only for a single before Kohli comes down and clips the leggie over midwicket but a superb effort from the fielder sees it being restricted to just two runs.
A couple of singles before Kohli swings the spinner across the line over midwicket for a four.
He then chips down and lofts Rashid down the ground as Jason Roy at long-on makes a diving effort to his left but is unable to take the catch and also ends up conceding a six.
India look to raise the tempo, targetting the spinner, as they score 15 runs from Rashid's second over.
Raina joins the party as he makes room before pulling a short ball from pacer Ball over midwicket for another six.
Ball tries a slower full delivery which Raina tries to scoop it over the leg side but doesn't make proper connection for just a single.
Kohli chips down but only manages to loft it on the bounce to thirdman for one.
Three more singles plus a wide as Ball goes for 12 runs in the 12th over.
England strike again at the very right minute with the key wicket of Raina. The left-hander chips down the track to Rashid but is beaten by the googly and is stumped by Buttler for 27 from 20 balls.
A superb over from Rashid as he makes the breakthrough while giving away just three runs to check India's charge.
Read more > 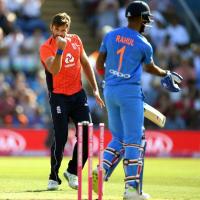 22:49   India struggle after early wickets
India 52-3 (10 ovs) vs England | Scorecard
Chris Jordan comes into the attack as Raina shuffles and clips it behind square for a four followed by a single.
Virat Kohli taps it on the off-side and calls Raina for a quick single as he has to dive to make his crease.
Raina then turns the fifth ball on the leg side for a couple to get eight runs from the over.
India are 31 for three in six overs, their lowest Powerplay score in the last two years.
Plunkett beats Kohli outside the off-stump who tries the slash but misses before takes one to thirdman.'
Plunkett tries the short ball as Raina pulls it over mid-on for a four as India are keen to inch their way back into the contest with some boundaries.
A tidy over form Jordan as he gives away five singles with England keeping India in control.
Leg-spinner Adil Rashid comes into the attack. Kohli slaps a wide delivery through the covers for a couple before he flicks the fourth ball on the leg side for two more runs.
Another couple for Kohli on the leg side off the leggie before he keeps strike with a single from the last ball.
Plunkett, who bowled a good first spell, comes back to replace Jordan. He starts with two dot balls to Kohli, followed by four singles off the next four balls.
England have done well to restrict India to 52 for three in 10 overs with Kohli on 14 from 19 balls and Raina on 16 from 12 balls.
Read more > 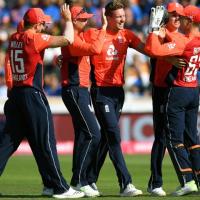 22:36   Rahul out for 6; India in trouble
India 23-3 (5 ovs) vs England | Scorecard
The in-form KL Rahul gets off the mark with a single courtesy of an inside edge before Dhawan is beaten trying to flick but the leg before appeal is turned down.
Dhawan taps the next ball on the off-side for a single before Rahul plays a delightful drive through the covers for three runs followed by a single to his partner Dhawan.
Ball continues as Dhawan and Rahul pick four singles off the first four balls before the former pulls a short ball which goes for a four after the fielder at deep square leg lets it go through.
The next ball is again as Dhawan miscues the pull shot which falls short of the fielder in the deep for a single.
Liam Plunkett comes into the attack, replacing Willey, who bowled two overs for seven runs.
India suffer another setback as opener Dhawan is run out for 10. He misses the pull as the ball fell on the off-side as the opener went for a quick run but failed to make his crease.
Dhawan made a lame effort of trying to make his crease, having given up hope, maybe he would have made his crease if he had dragged his bat. Morgan nearly made a mess of the run out but in the end managed to break the stumps and run out Dhawan.
A couple of balls later as Rahul is bowled for six as India are left reeling on 23 for three in five overs.
That was a horror shot from Rahul, who tried to counter-attack with a big hit over the off-side but missed it completely and was bowled.
Read more > 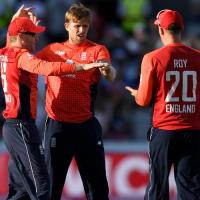 22:10   Rohit out for 5; India lose early wicket
India 7-1 (2 ovs) vs England | Scorecard
Left-arm pacer David Willey opens the bowling for England, while Rohit Sharma and Shikhar Dhawan are the two openers for India.
Rohit defends the first three balls before he shuffles across and tries to scoop it over the keeper but is beaten and hit on the body.
England appeal for leg before wicket which is turned down and they decide against taking the DRS with Rohit getting a bit of inside edge as he picks up a single to get off the mark.
Dhawan plays a nice drive off the last ball but can't find the gap through the off-side.
Debutant Jake Ball to bowl the second over. Some extra bounce as Rohit looks to turn it on the leg side but is hit on the thigh pad to get a leg bye.
Dhawan easily turns the next to square leg to take a single which gets him off the mark.
Rohit seems desperate to break free as he stands tall and smashes a length delivery through the covers for a four.
But Ball gets revenge with the wicket of Rohit, who top edges the pull and is caught by wicketkeeper Buttler for five.
Read more >
21:38   England elect to bowl; India unchanged
Check out the playing XI of the two teams: 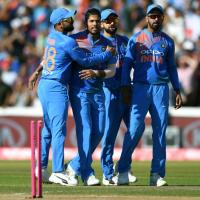 21:15   India eye series-clinching win vs England
Welcome to the coverage of the second T20 International between England and India in Cardiff, on Friday.
After a convincing victory in the opening game, a confident India will try to ensure that a spin-wary England remains on the back-foot when the two sides clash in the second game.

India stand on the cusp of a sixth successive T20I series' win -- a run stretching back to their 2-1 win over New Zealand at home in November 2017. In all, they have been unbeaten in bilateral T20I series since September last year.

In terms of ICC Rankings, a 2-0 series' lead will allow India to close the gap with second-placed Australia, while a 3-0 whitewash will help them overleap to second behind top-ranked Pakistan.

The big question facing England is how to contend with the unorthodox wrist spin of Kuldeep Yadav.

In the aftermath of their loss on Tuesday, both skipper Eoin Morgan and ace batsman Jos Buttler have urged their teammates to show more patience at the crease and watch the ball carefully.

India are unlikely to make a change and disturb their winning combination and the pacers will have to learn from the experience of bowling on such batsmen-friendly pitches.

AAP celebrates after win over BJP in Delhi